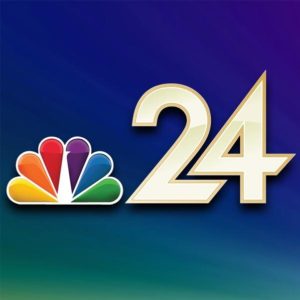 Ron and I generally take turns answering the phone, but if I’m being honest here I’d have to say he answers more than I do. One particular day, I was the lucky one to answer the phone.  Surprise, surprise if it wasn’t our local NBC affiliate, channel 24 calling to make a special request.  We were asked if a reporter and a cameraman could visit us the next day for their morning news program.  Several people had suggested that they make The Mill House the last stop on their tour.  We would be interviewed live for three short segments.  Of course I was very excited…who can pass up an opportunity for free advertising!

But there was one catch…would we be willing to be on the show early?  Ron and I are both early birds because part of our job is preparing and serving breakfast so no problem!  Right…Soon we found out that they would arrive at 5:30 am.  That means getting up no later than 4:45 am.  That’s even early for me,  but how could we turn down such a great publicity opportunity?  So, 4:45 if was!  With a quick shower and plenty of coffee, we answered the 5:30 call.

We were so happy we did.  It was a lot of fun and Elyse, the reporter from channel 24 was talkative and full of humor.  We may have appeared a little sleep deprived, but it was an experience worth the early morning alarm clock.

Here’s a link to the segments.  You can watch all three by clicking on them.

Just a quick funny that was cut from the first segment which was shot in our common room….Because we had to open our sliding door to prepare The Garden Room for a segment, tiny little moths flew inside being drawn to the light…it’s still mighty dark at 5:00 am.  Before the live segment, all of us were chasing and killing little moths so they wouldn’t show up on television. We must have missed one little guy because as we were introduced on the live segment a moth landed on my glasses, I flicked it off and it went directly into the reporter’s eye, causing her to jump and fling the moth off.  It was so funny and hard to keep a straight face.  When the segment was over we had a good laugh and she promised to cut it out of the video you will watch online..oops, I also called her by the wrong name..and she cut that too!

Thank you Elyse, Mr.Cameraman, and NBC 24 for visiting us!

The wife and I stayed here for our one year anniversary and had a great time. The owners are so nice and caring. It is a quiet and romantic place to stay, with great views and quaint historic rooms with a lot of character. We will definitely be back again!

We visited the Mill House for our second time in the Grand Rapids area. Ron and Kathy even made sure to have the local bald eagle put in an appearance on one of our river walks. Clean spacious room, pleasant company and bacon scones. A slice of heaven in NW Ohio.

One of the best overnight stays we have ever taken. First, you are greeted with warmth and kindness. The Mill House is a true getaway from the rush and stresses of life. The rooms are all very inviting and a place of refuge. The snacks are best around and the breakfast felt like home with relatives. Will recommend this place to everyone and returning very soon!